It’s only Wednesday. Even as I sit here typing this, the rain is pouring down outside and thunder rumbles. More families are going to feel this tonight.

It has been five days since the world here changed. It started out fine, just like any precursor to the weekend. We had some rain at the house, nothing big. But it just kept raining. I went into work. My husband braved the rain to clean out the stupid drain in the back that always clogs. Water was pooling on the back porch. No biggie, it’ll slow down. We were lucky. It kept raining, but we kept it away. 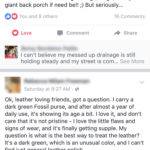 Meanwhile, tens of thousands of families were going to sleep in their safe homes for the last time in a long time. Friday night they began waking up with water in the house. We sat on the sofa, oblivious and just watched the Facebook feeds for weather updates. They were filled with posts about the Olympics, or something politica 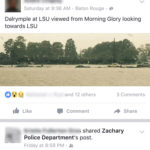 l or profile pic updates. I started seeing strange posts, like “Ducks swimming across road between the LSU Lakes” or “People are rafting down our street.” Wow. Some flooding much be happening. That sucks, it’ll let up.

About 10am I started seeing Church cancellations, followed by a request for a licensed electrician. A friend needed one to “see if her brother’s house was safe.” Saturday became chaos.

Not long after, prayer requests began, along with support from friends. “My husband and a friend are in the process of rescuing my parents and others from rising waters. They took life preservers but they’re aren’t enough. Prayers needed!!” “If anyone needs us, we’re thankfully high and dry. I have two extra bathrooms for pets. A couch and a blow up mattress!” We started firing off recommendations for roofers and mold remediators, businesses we’d worked with before and knew to be reputable. We went out for a few supplies, we were still unaffected. The end of my neighborhood had 3-5 feet of water in the homes along the Southern end. We drove by a low rent apartment complex. Dozens of people were standing on the sidewalk staring at the parking lot and first floor. Water was up 3 feet. All those cars, all those insurance claims. These residents were generally elderly or poor. They will have a harder time getting back on their feet.

More images and videos started coming in. I-12 covered in water. Some of the first pics of houses with water 3-7 feet up. Coffins floating down the street. An incredible video of a man rescuing a lady trapped in a car and then saving her dog too. I had no idea a car could sink that fast. An aerial video of the city of Zachary underwater! The evening went on. A friend posted “I pray the worse is over! Some friends of ours have already lost their home and vehicles. I’m happy that at least everyone is safe so far! This was like a hurricane with no warning…” Lots more photos rolled down my feed, along with offers for shelter and pet relocation. “Denham Animal Shelter has gone under. We have 50 dogs on the roof if anyone has a boat.” We offered our house to friends for a place to stay. I agreed to take on 6 shelter kittens that needed fostering. It was such a strange mix of devastation and positivity. It also took its toll on those trying to help. “I’ve been answering the phone all day, most people had to evacuate. I’m wrung out from all the emotion…I just sat in the tub and cried and cried”

Sunday began the strangest mix of watery apocalypse and everyday suburbia I’ve ever encountered…and I’m a gamer. A mix of politics and everyday life, punctuated by entire businesses, neighborhoods, cities (yes, cities) underwater. AT&T’s network went down, so you weren’t able to get in touch with a lot of your kin or friends.

Sunday brought more rain and lo and behold, some good ol’ boys went out and did something about this disaster. They met up at a Home Depot and encouraged people with boats to meet them out there and they did rescue runs all day. He got a lot of traction – he did a live feed when he could, rounding up people with boats who wanted to help, people without who wanted to help and implored his audience: just do something! He was the inspiration for this website. There were many more out there before them and after, some faceless and some famous, but it doesn’t matter. What matters is the ongoing list of cries for help and rescue were addressed.

“Please check here – an elderly man with a broke hip there”

“They have NO Phone service, Sandy is Handicapped Can’t Walk!!! They must be rescued!!!! House taking on water!!!”

“HAVE YOU SEEN THIS WOMAN?”

“Still no word on my 86 year old grandma and uncle”

“We have a 2 week old baby. Water is rising around us. Please send rescue.”

“There is a woman who just had a kidney transplant..They are stuck in their loft on the second floor and we have lost contact…Please if they are close!!!”

It went on and on. Thousands of comments for prayers, rescue, support and aid. “Coast guard overwhelmed guys will take everyone to help the list yesterday evening was a waiting list of 7K to be rescued and growing this is large scale rescue from Baton Rouge, Denham, Lafayette, etc.” “The sheriff said yesterday Bass Pro had given all their boats engines and life jackets to the police departments”. We wondered where the news was. We wondered where the Feds were. Where were the people who were going to help and report in this immediate crisis.

Right here. From the coast guard, to the police, to the self-proclaimed Cajun Navy, to the common man, neighbors, animal lovers and friends. We’ve had (so far) 11 deaths. Of the 20K+ who were rescued and hundreds of thousands who have been displaced from their homes. I watched these people save themselves. 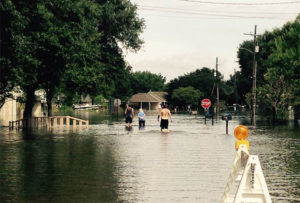 Monday was similar, friends had to evacuate their homes, the rivers were cresting and it would continue on in various places. Many had 10 minutes to an hour to get their belongings and leave. Can you imagine? 30 minutes to grab what is most important to you in your life. What would you grab? Many had to leave with just the clothes on their back.

Tonight, we’re currently under a flash flood warning and a river flood warning until tomorrow at 3pm. I know the danger hasn’t passed. For many, they could see re-flooding and still others further south will be impacted with water with nowhere to go for days to come. We still have many in impromptu shelters around the city and parishes. Hundreds of cots with people who just want their personal space back and are having to steel themselves against the days to come. Did you know the Lamar Dixon Expo Center in Gonzales has taken on livestock? Did you ever think about what it took to save horses, sheep and cattle? People are sleeping in pens with their pets. So much property has been lost. So much cleaning up to do. The past two days have seen curbs full of furniture, carpet, belongings and memories. People salvage what they can, but things sitting in the Louisiana heat and water for 2+ days are hard to recover. Thousands of people who never had to have flood insurance, because they weren’t in flood plains are having to turn to FEMA and begin that process. It’s going to be harder for those people to be made whole again. We don’t have flood insurance, we’re outside of the flood plain. We got lucky. 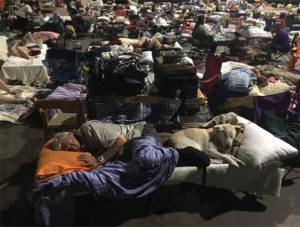 A crappy nameless storm came and sat at our doorstep and showed us what every 1000 years or so might look like. South Louisianans cry a little, but celebrate more the lives saved and begin to salvage what they can. Those less affected have begun to take truckloads of supplies to local shelters, to the point of overflowing. Money had been freely donated and thousands are volunteering in any way they can. I have witnessed the best in humanity, strangers helping strangers regardless of color, race or creed. They really aren’t kidding when they say a storm brings the State together.

I spoke briefly with a friend about this today, just how surreal the past 5 days has been. He is from New Orleans. He kind of chuckled softly and said “Oh yeah, you’re not from here. You’ve never gone through this before.”

I wrote this for my friends and family outside of Louisiana, to try and share some perspective on how strange these days have been, but also to share how lonely still I think the state feels. At least, I do. I thought, surely, people will know! People will rally and help! We’re looking at billions in property damage alone. We’re going to need help! But nothing came during the worst of it. That stung in a way I wasn’t prepared for. Only now are headlines creeping in about one or two sensational stories. The coverage is bittersweet. “Where were you when it mattered?” I think. “Where were you when it wasn’t about the body count, or the destruction or when you weren’t shamed into it?” I’m disappointed in a way I can’t articulate. It hurts to think over the weekend thousands had and will continue to bear it alone as a State. They deserve better. These stories should be told. We need to be heard.

This site is setup to help gather relief supplies and money for those devastated by the recent flooding in Louisiana. Our goal is to reach people across the USA and give them a place to send supplies to help support this community in a time of desperate need.
Read More...